On Wednesday October 9, 2019, at 1pm, I made my way by car from my home in “The Bottoms” of Lauraville, in Northeast Baltimore, to the campus of Morgan State University, Maryland’s illustrious HBCU. The drive took all of 5 minutes, including the time it took me to park on the lot of the former Northwood Shopping Center, soon to be a part of Morgan’s burgeoning campus. I had a 2pm appointment with Morgan’s Oral History Project, and I wanted to arrive in plenty of time to find parking and make my way across the campus to the Earl S. Richardson Library. 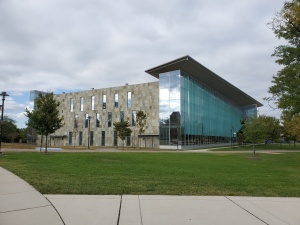 Although I’d passed by the school hundreds of times, I’d only been on campus a few times: first to visit a friend who was enrolled there in the early 1970s, and years later, to attend concerts and events at the Carl Murphy Fine Arts Center. (I had chosen a different path to higher education, earning my B.A. degree from Goucher College in 1974.) I wanted to soak up the atmosphere of this school, where many members of my family had matriculated, some of them earning degrees. I did my best to walk as a current student would—confidently, in jeans, a tee shirt, and a jacket—on this cool Autumn day, with a bag slung over my shoulder holding the documents I would share. As I walked past the Morgan State Christian Center (now called University Memorial Chapel), I remembered that I had briefly served there as an organist for Sunday services in the early 1990s. My connections to the campus may have been tenuous, but they existed. Along the way, I asked a student or two for directions to the Library, and I found the room where I was to meet my host, Rosemunde Smith, with little difficulty. I was astonished by the huge size and open architecture of the building, and more so by the silence, as some students consulted computer stations and others sat quietly absorbed in their work at carrels. But I had to chuckle at signs posted nearly everywhere, reminding students to put down their cellphones before asking for help from staff.

While waiting with Mrs. Smith for the student videographer, she and I engaged in lively conversation, getting acquainted and finding common interests and similar experiences. I even handed out several of my baltimoreblackwoman business cards to her colleagues.

Finally, the videographer arrived, set up his laptop/camera, and we began.

Here is a link to the interview: https://drive.google.com/file/d/1SYAuNcsm1oJNZe8W0DVEGyNVZvZW-oBD/view?usp=sharing [Disclaimer: The digital recordings and transcripts resulting from this oral interview will become part of the oral history archives for the Richardson Library Special Collection at Morgan State University, where they will be made available for historical and other academic research and for public dissemination. All rights, title, and interest pertaining to it are assigned to Morgan State University. The views expressed are those of the interviewee and do not reflect those of any other entity.]

After the interview, I gave Mrs. Smith the folder I’d brought, to be added to the Archives. In addition to a prepared outline, I included copies of my parents’ obituaries, an interview given by my mother that was published in The Lauraville News in 2016, an article I contributed to the same publication in 2018, and two photo collages of the neighbors and friends I’d grown up with, during the 1960s and 1970s. I also learned one important fact about my history and my community: Contrary to what I was told all my life, the entire Morgan State Campus is part of Lauraville!

Though the interview took place on October 9th, the final editing was not completed until October 24th which, coincidently, would have been my mother’s 87th birthday. In addition, I must make two important corrections to my interview: In 2020, Metropolitan United Methodist Church, at the corner of West Lanvale Street (not Lafayette Avenue) and Carrollton Avenue, will celebrate its 195th (not 175th) Anniversary.

A complicated and sometimes divisive relationship between Morgan State and Lauraville has existed, going back to and preceding the school’s purchase of its current property at Coldspring Lane and Hillen Road in 1917. In brief, the purchase of the land by Morgan College [originally a private institution with ties to both the Methodist Episcopal Church and John Goucher (the namesake of my alma mater) before becoming a State College and, later, a State University] was contested by Lauraville residents in 1917. Not only did the school prevail, but the small, covenant community of Morgan Park was also established, with homes built for Morgan professors and other black professionals. It is that community that my peers and I identified with, while growing up in Lauraville.

This history continues to be researched and investigated by local scholars.

On Thursday, November 7, 2019, at 11:00am, Morgan State University will host a Reconciliation Ceremony with the community of Lauraville, as part of its Founders Day activities. This Ceremony seeks to acknowledge and heal the complex relationship between them. It is my hope that this event will be a catalyst for more harmonious relationships between all of us who call Lauraville home.