This past Saturday, April 18, 2015, my Mom and I attended one of the opening-weekend events for Dance Theatre of Harlem’s (DTH’s) 40th-anniversary art exhibit at the Reginald F. Lewis Museum in Baltimore. Though based in New York, DTH has a strong Baltimore/Maryland connection, as numerous dancers throughout the years have come from our region, including several current dancers [see http://touch.baltimoresun.com/#section/-1/article/p2p-83327182/].

This particular event featured my dear cousin Keith Saunders, currently Ballet Master for DTH. Keith has been part of DTH for 37 of the 40 years being celebrated this year, and on Saturday, he was interviewed by one of his former students, Sharayna Christmas-Rose, about the history of DTH as well as his personal experiences and growth within the organization. 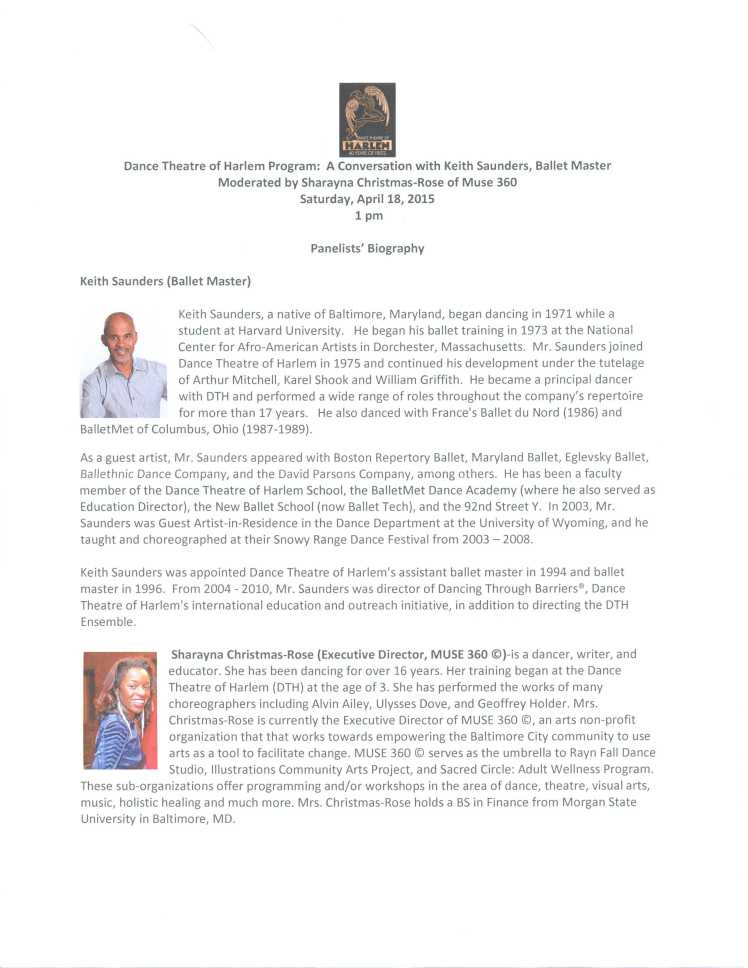 What a joy it was to hear Keith talk about his experiences over the last 40 years! Although our career paths were vastly different (mine was spent in printing/publishing as a STEM copy editor and trainer), I was so happy to see how similar our paths have been in terms of personal growth and development.

Keith entered Harvard University in 1971, intending to become a lawyer and to study political science! But a chance encounter with a dance class that year turned his world upside down and started him on an entirely different path as a dancer, teacher, and administrator—primarily for DTH, but also for several other organizations—and as an added bonus, he has traveled all around the world, learning first-hand about different countries and cultures, and developing not just the skills, talents, and art of his chosen profession, but also the business of his profession!

Keith recounted his journey from student to colleague of the great Arthur Mitchell, who broke racial barriers by becoming the first African-American dancer to join the New York City Ballet, led by the legendary George Balanchine, in 1955 [when Keith and I were only 2 years old!], and who went on to found the Harlem Ballet School in the wake of Dr. Martin Luther King’s assassination in 1968. Only later did Mitchell decide to create the dance company we now know as DTH.

Keith recalled that, for Mitchell, it was not enough to learn to be a great dancer; it was also paramount to learn about all the components of the dance business—from the costume department to the marketing department; from the making of props and stages to the workings of the front office!

Except for the world travel, I experienced similar broad growth and development in my profession, and I was delighted to grasp the uncanny parallels of our life journeys. In the printing/publishing industry, I too was required to learn not just about the art and skill of editing, but also about the printing and publishing process, from how a scientific article came to be accepted for publication to how that article was composed, printed, bound in a journal, and disseminated to its chosen audience.

Among the “tangential” skills that both Keith and I learned in our professional lives was an ability to teach the skills of our professions to others, as well as to communicate the importance of and our passion for our professions with others.

During the interview, Keith showed a 15-minute clip from a BBC documentary about DTH, including footage of an early tour date in Great Britain. The clip also showed Arthur Mitchell revisiting the first and second sites of the original dance school in Harlem, New York. “Then and Now” segments showed the garage that Mitchell transformed into his first dance studio, as well as the second location in the basement of a now-defunct church.

The late 1960s was a much more open, encouraging, and exciting time to be alive—more “free-range”—than today’s cautious, disparaging, and distrustful times. Mitchell recalled grabbing children off the streets near the garage to join his dance classes; he even enticed boys to learn ballet by telling them that he could improve their sports skills—such as jumping higher to make baskets on the B-ball court!

It saddens me that such “outrageous” acts of hope and change could not happen in today’s world. Instead of having the freedom to create and build an open, vibrant, joyful, and thriving environment for our children, we now live in a constricted and fractured world where danger and harm lurk around every corner, and safety and trust are scarce.

The “Then and Now” segments were also bittersweet because the “Now” views were of abandoned and decrepit buildings instead of the bustling centers of joy, learning, and pride they once were.

And yet, DTH has continued to build a more beautiful and enlightened world for its students and performers. As Keith commented, one of the greatest accomplishments of his career has been to see the young people he has worked with go on to become lawyers, teachers, doctors, and athletes who have used the discipline and well rounded skills they learned in the dance world to excel in these other, seemingly disparate, spheres. I experienced a similar thrill, as I watched my editing trainees move up the ranks of our business or even move on to other careers.

I am so grateful and happy to have seen my cousin in action and to know that our shared upbringing and background carried us both productive and fulfilling lives.

If you happen to be in Baltimore between now and mid-August 2015, do yourself a favor and visit the Reginald F. Lewis Museum to see the DTH 40th Anniversary exhibit. Or you can see DTH in performance at Morgan State University on June 20, 2015—right after they return from their current tour of Italy and Israel.

One thought on “Out and About: Dance Theatre of Harlem”